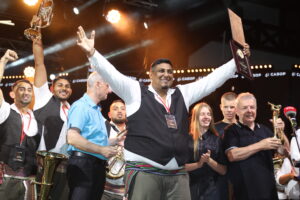 A total of 17 trumpet orchestras participated and the expert jury made the following decisions:

– Dragan Pavlović from Guča (Dragačevske trube) was declared the most popular trumpet player, i.e. He won the trumpet of the audience

– The second orchestra is the Siniša Stanković Orchestra from Yagužanje

– The third orchestra is the Stefan Mladenović orchestra from Vranje

– The second trumpet was won by Vladimir Ivanović from Zagužanje

– The third trumpet was awarded to Kristijan Trajković from Zaguzanje

– Hope to see you next year in August!